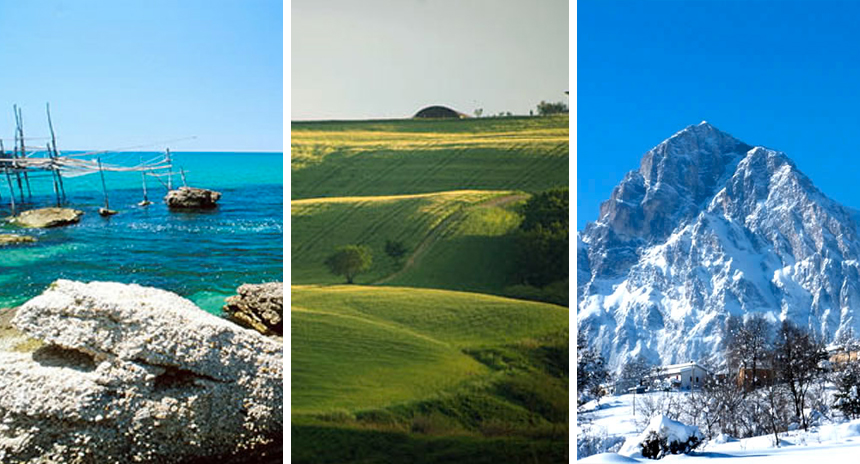 133 kilometers of coastline, along which alternating golden sand and cool pine forests, cliffs, headlands and pebbly coves, sandy beaches and lively and festive solitary where basking in peace. The sea of ??Abruzzo is all this, plus a number of places awarded the prestigious "Blue Flag", the sympathy and the proverbial hospitality of the Abruzzi and behind the greenest region of Europe. From the beaches you can move to the beautiful hinterland of nature, villages and historical towns, castles, abbeys and monasteries, lakes and archaeological sites. Excellent opportunities to enrich a unique and original your beach holiday.

The north coast.
From the mouth of the Tronto, which marks the border with Marche, up to the mouth of the River Forum, between Francavilla al Mare and Ortona, the coast is low and sandy beach looks like a large and regular strip of fine golden sand with shore up to three hundred meters in some places there survives the typical Mediterranean vegetation, dunes marking the border between the beach and green pine trees with their fragrant shade of resin. A splendid and famous pine accompanies Pineto to its beach, a nearby thicket of pine and Aleppo wraps the mighty and the Tower of Cerrano, once a watchtower and stronghold against the Moorish pirates. Large and well appreciated, in the heart of Pescara, the Pineta d'Avalos and further north to Santa Filomena, now protected by a State Reserve, which separates Montesilvano from its beach. It 'a river of life, animated by an enormous selection of fun and entertainment, with plenty of accommodation and entertainment, ideal for families seeking large beaches and adequate facilities for young people who love sports and nightlife for singles and groups friends who want to socialize with good cheer, but also for older people who want to live a quiet holiday with all facilities at hand.

The southern coast.
The south coast becomes rocky near Ortona, soaring from the sea in the picturesque cliffs of Punta Acquabella Ferruccio and Punta, Punta del Cavalluccio and Punta Aderci (or Punta d'Erce). In many ways it is rugged with cliffs and small bays with beaches and bays, flanked by the beautiful pebble beaches, where it's nice to dive with the mask in order to observe the seabed moved and full of life thanks to the sea is always clear. Between the high sandstone cliffs you will discover the sweet gulf, and then even further south than the large, animated Vasto, with wide beaches that come back again to be sandy to the border with Molise.

Hills and hills of the Abruzzi Apennine

the wake of the Pescara Valley divides the hillsides into two sections:

The Subappennino Aprutino is formed by two main groups: in the inner band dominate materials arenarei with sandy loam and clayey sands. The limits of this range can be represented by a line passing through Canzano, Castiglione Messer Raimondo, Pens and Catigliano Nora comes to the river. The marl and clay supporting plates conglomerates and banks of yellow sand, which are but remnants of the 'last marine sedimentation.
In Subappennino Frentano south of Pescara, the masses of Flysch (a deposit is made ??of thick debris) ecocenico prevail in most of Chieti, and Molise.
The Badlands, locally called Scrimoni, dig and affect the nearby hills. In Subappennino Aprutino the best known example of the Badlands are Bolge Abruzzo Atri, in Subappennino Frentano are very large gullies at Guardiagrele.
While not having the Abruzzo volcanic zones are noted pseudovulcanici phenomena.

On the mountains of Abruzzo Gran Sasso The noble and rugged with its clear limestone dominates the Apennines, just below the north face of Corno Grande are the Cauldron, the only glacier in the southern Apennines and in Europe. To the south of the massif extends the boundless plain of Campo Imperatore, located at 1800 meters above sea level. The Monti della Laga are rich in springs, streams and forests. The Majella, Morrone linked to the massive, dominating the landscape of Abruzzo rising between the sea and the Apennines, from time immemorial it represents for the people of Abruzzo the mother mountain. Between the mountains and the sea, the hills brings obvious signs of its continued evolution in clay slip downstream, where the gullies incise the roundness of the horizon. Alpine environments that smell like the sea in summer, the snow finally melted and receded to the brilliant green of its forests of beech and its endless fields, the mountains of Abruzzo becomes irresistible. The heyday of nature gives the whole region, the splendor of maturity: the forests and green meadows of the mountains, the endless plateau dotted with grazing herds and flocks, the spaciousness of the landscape, which have nothing of the impending and steep alpine environments, the fresh crisp air scented sea breezes (even on the highest ridges of its mountains always feels much the scent of the sea, which is clearly visible here, a few miles as the crow flies), the miraculous preservation of the environment, crystallized in timeless landscapes, the mountains of Abruzzo make a special place, very capable of hitting the heart. More than anything it shows the highest number of aficionados who count, and year after year they return to the beauty frequentarne: who falls in love with the mountains of Abruzzo, it remains forever. LAbruzzo, land of parks, is also called Green Region Europes. In fact this region there are three National Parks, a Regional Park and 38 between oasis and regional and state reserves. In total protected areas in Abruzzo represent approximately 30% of full regional territory. It alternates between the most diverse natural landscapes: the vast karst plains of the Gran Sasso to the Highlands Further, the deep canyons of the Maiella to the extensive forests of Laga from the high pastures to wild rocky areas, caves and waterfalls, and yet even a glacier, the Calderone, the southernmost lunico dellAppennino and Europes.